Now, we aren’t saying to stay away from the Smoky Mountains because there are tons of animals looking to kill you the minute you step foot in the park—that’s not the case. There are lots of animals in the Appalachian Mountains, and some of them can be dangerous if not treated with the proper respect—we just want you to be prepared. So, visit this beautiful place, and keep your eye out for its inhabitants!

You really don’t have anything to be afraid of here, so if you see a Bobcat just enjoy! They are nocturnal, so they probably won’t be around when you are hiking, but you could get lucky. They are carnivorous little kitties, and though they can only grow up to three feet in length and weigh up to twenty pounds, they can kill small deer.

The Eastern Cougar is the Smoky Mountains’ only native mountain lion. They were believed to be eliminated from the region, but consistent sightings suggest that cougars present here are transients. They are large brown or gray cats that weigh on average around 140 pounds and can be about seven feet from nose to tip of tail. They are generally shy, but they have killed humans in the past—21 people have been killed in the past 118 years.

These cuties are extremely shy. They are about the size of a domestic dog, and can weigh up to 24 pounds. Their charming rust color and fluffy tail make them extremely recognizable. The Red Fox is a solitary hunter that typically feeds on small game, but they have been known to eat human food if exposed to it.

Coyotes look like medium-sized Collie dogs, but they have a round and bushy tail. The coyotes living in the Smokies have thick, dark fur and white bellies. You may hear their howling at night. They can weigh up to 45 pounds and can be about 60 inches long. They are extremely athletic and can run at high speeds. They easily leap an eight foot fence. Alone, they hunt small prey while in packs they can bring down much larger animals. They are typically afraid of humans, but they can prove dangerous for pets! 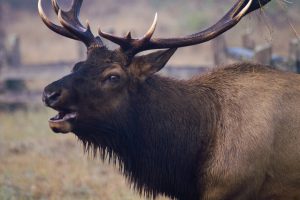 Successfully reintroduced to the Smokies in 2001, the elk population is now thriving.  An adult male averages 600-700 pounds, is approximately 7-10 feet long, and can be 4.5-5 feet tall at the shoulder.  A male’s antlers can have a span of 5 feet!  These creatures can be fascinating to watch – but make sure to watch from afar.  During the rut, or their mating season, in September and October, males will often put on displays of challenging each other to attract a female.  While they’re normally docile, elk have been known to charge when they feel threatened.

Although they won’t hurt you, their spray is extremely unpleasant!  Though they are small and cute, their spray can travel up to ten feet.  The spray causes no real damage, although it is difficult to remove and smells terrible.  They are about the size of a house cat, and can be striped, spotted or swirled—but all black and white.

These animals are not native to the Smoky Mountains, but they somehow arrived and have flourished. These hairy pigs have huge heads, short legs and can be dark grey, black or brown. They typically weigh between 110 and 200 pounds, but this varies greatly. Both males and females have tusks, although male tusks are much larger. They are not typically dangerous, though they will defend their children violently. Males and females will charge, and females will bite if compromised.

Though smaller and less aggressive than Grizzlies, Black Bears can prove dangerous. About 1700 roam the park, and they can grow up to 300 pounds. While they are usually hidden away and sleeping for the extended periods in winter, their time in the spring, summer and fall is consumed with finding food.  They will eat anything, including human food.  Human food drastically shortens their life span and removes their fear of people, often making them dangerous.  Feeding bears is illegal, as well.

This is a venomous snake, though their venom is not lethal. They can be up to 36 inches in length and have a stocky body. They are typically copper, orange or pinkish in color with chestnut colored bands crossing the body. They are shy and difficult to find, but they have bitten more people than any other venomous snake in the U.S. They will only strike if very threatened and are most common below 3,000 feet.

This is a fairly large venomous snake that lives mostly above 3,000 feet. They can be up to 4.5 feet long and fairly thick, with black or brown cross bands on a lighter background of yellow, brown or gray. Some can appear all black. It has a triangular head with small scales on the crown. This snake’s venom is not known to be lethal.

Book a Safe and Comfy Stay in the Mountains 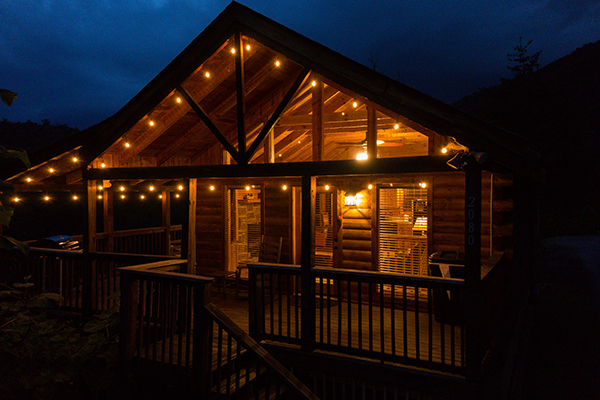 After a day of seeking out these creatures, retire to a comfy and safe cabin in the woods.  Let American Patriot Getaways help!  By booking a Gatlinburg cabin with an incredible view or a secluded Pigeon Forge cabin, you’ll be tucked away in the Smokies.

Give our Reservations staff a call at 800-204-5169 or check out our website.  No matter your group size or budget, American Patriot Getaways has a cabin for you!

Be sure to follow us on Facebook and Instagram to keep up to date with all the latest area information.  Check us out on Pinterest for easy recipes to cook in your cabin, decor inspiration, and more!