Beyond the Lens Family Fun 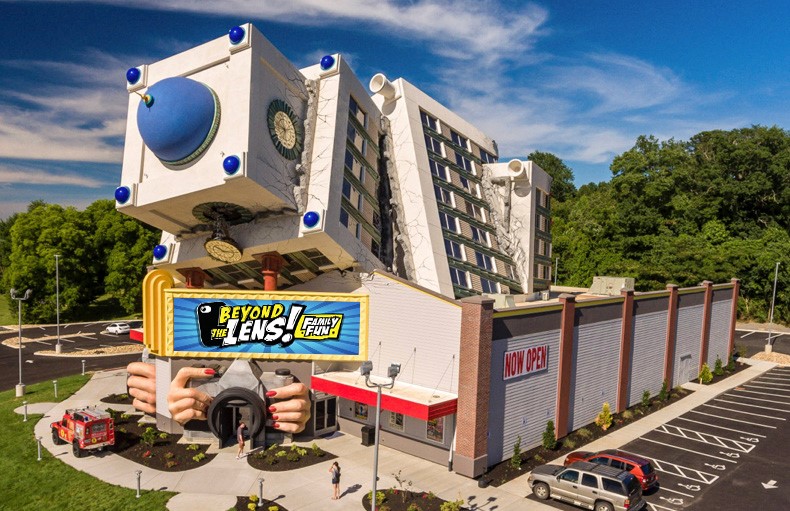 Beyond the Lens is a highly-interactive and immersive experience for all ages. Pairing old-school nostalgia with cutting-edge technology, you’ll stir up forgotten memories and have a chance to make some new ones. Learn about the events and public figures who shaped our culture, and experience the games and entertainment that will shape our future.

With dozens of thrilling photo opportunities scattered throughout, you’ll take those picture-perfect memories home with you. 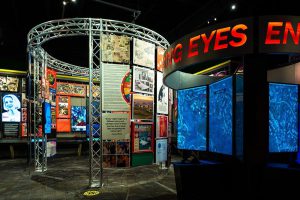 In the realm of fascinating mysteries such as Bigfoot is the UFO and Space Conspiracies Room. The National Enquirer has long been known for reporting UFO sightings. Several of the tabloid’s most notable space conspiracy stories are highlighted in this exhibit. This room is also where you will find the Alien Egg Pit – climb in, take pictures, examine the “eggs.” It kind of looks like a giant bubble bath but without water. It’s definitely a place to be silly with family and friends. 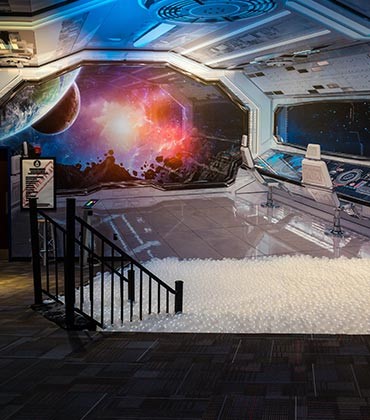 In the History of Social Media Gallery, there’s a YouTube tower and a station that lets you create your own tabloid cover. Perhaps your brother is secretly an alien? Is your mom a famous peanut butter thief – sneaking into pantries across the country to dip her finger in new jars of the popular treat? You get to decide!

The Hallway of Moving Pictures is like something out of Harry Potter’s Hogwarts’s School of Magic with celebrities spilling their conversations and you can join in.

Step inside the augmented reality closet and decide what your favorite British royal  will wear and just how much it cost. Find out what those medals on the jacket stand for. You can also follow the “Path to the Crown” for all those what if this person dies, or this person abdicates scenarios.

Also in the Royals area is a model showing the path Princess Diana’s vehicle took the night of  Aug. 31, 1997, when she was killed in a car accident in Paris, France. 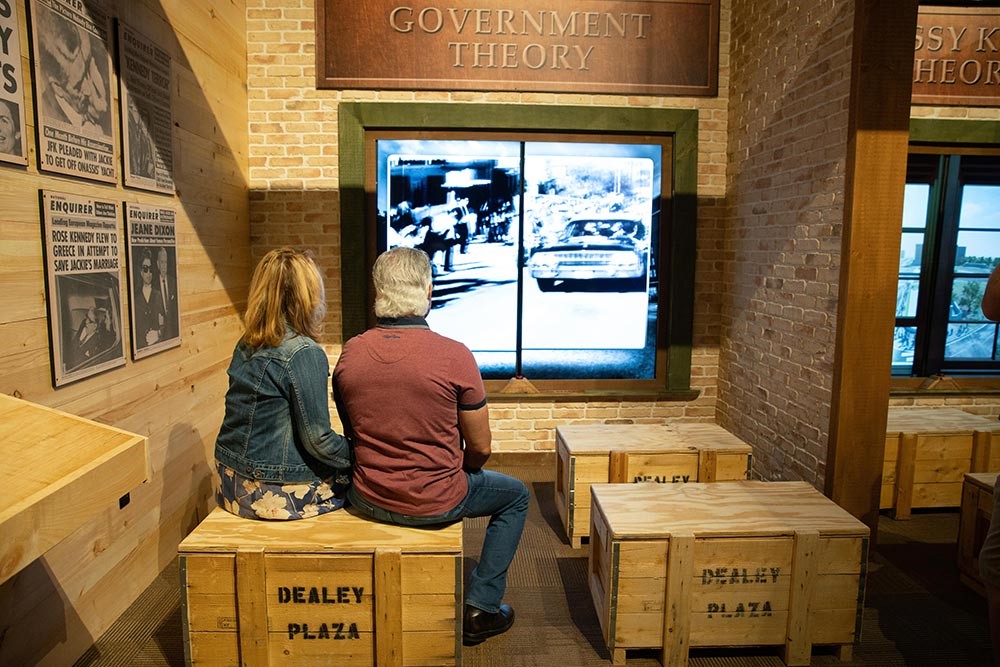 President John F. Kennedy – part of America’s royal family The Kennedy’s – was assassinated in Dallas, Texas, during a motorcade on Nov. 22, 1963. The 35th president of the United States.

Within a few hours of the shooting, police arrested Lee Harvey Oswald and charged him with the murder of the 35th president of the United States. The next day, Jack Ruby shot and killed Oswald, thus silencing the only person who could have offered more information about the event. The Warren Commission was organized to investigate the assassination and to clarify the many questions that remained.

There are still many questions and theories about how, who and why President Kennedy was killed. At Beyond the Lens, go back in time and witness the view from the School Book Depository window decide for yourself among the Government Theory, Secret Service Theory and Grassy Knoll Theory. Then vote on which conspiracy you believe to be the most conceivable. There are 13 more conspiracies waiting via the red phone “hot line.”

For some less serious adventures, look at the inside of a 20-foot long Kaleidoscope filled with thousands of colors and effects. Beyond the Lens calls this an “Ultimate Selfie.” 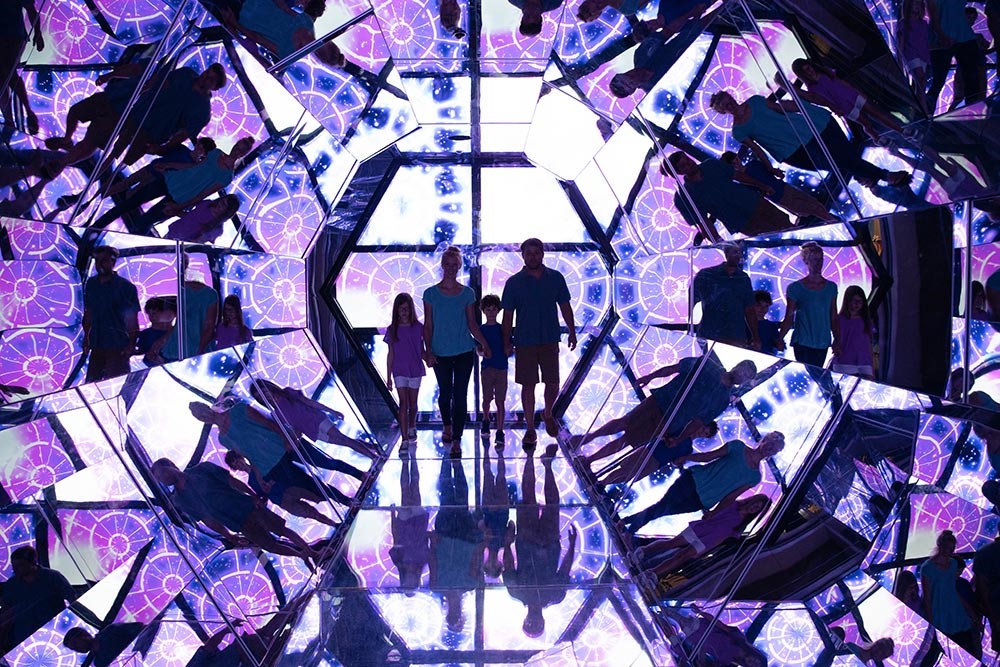 Just like a celebrity at this week’s MTV Video Music Awards known as the VMA’s, walk the red carpet and watch yourself “LIVE” on the monitors while throngs of Paparazzi take your picture and call for you to look at them or answer their questions.

Throughout the Beyond the Lens attraction are augmented reality interactions and virtual reality games that will have your friends laughing as you hit, punch, kick and play with things they cannot see.

In addition to the Royal’s Closet, there are yellow discs on the floor come to life in an Augmented Reality when the Beyond the Lens app is pointed at them. What pops up? Your favorite celebrities’ pets – be it a pig, a snake, an elephant or maybe a goat. 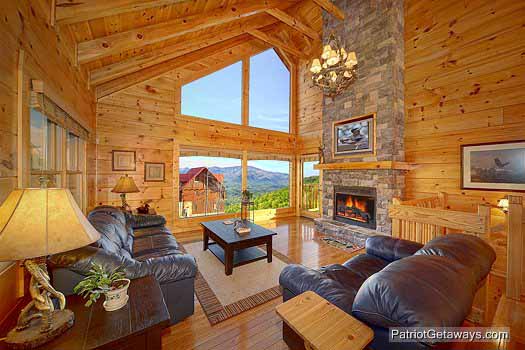 Whether you want to spend a weekend or a week, American Patriot Getaways has a cabin for you – up in the woods where you can speculate about (and search for?) Bigfoot or closer to the action in Pigeon Forge – all beautiful and secluded with amazing Smoky Mountain views.

Give American Patriot Getaways a call at 800-204-5169. Let our experts help you find the right cabin and all the right fun and food in Pigeon Forge.

You can also contact us online by searching our Pigeon Forge cabins with views. Check out our Pinterest boards including  Cabins near the Parkway. Also, see our Places to Eat in Pigeon Forge page.