Pigeon Forge, located in the eastern portion of Tennessee, is known for its traditional Appalachian crafts, music and folklore. Visitors flock to Pigeon Forge each year to enjoy popular tourist attractions, like Dollywood, unsurpassed shopping and some of the best chalets, vacation condos, and cabins in Smoky Mountains.

The Pigeon Forge area served as a Cherokee hunting ground long before it was a popular tourist destination.  So how did Pigeon Forge eventually become a family-friendly resort community? Here’s a bit of local trivia to add some historical perspective to your next visit. 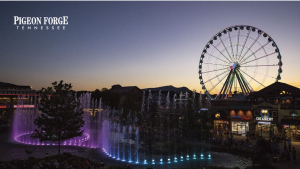 Today’s US-441, or Newfound Gap Road, closely follows an ancient Cherokee footpath called as the Indian Gap Trail. This trail crossed the Smoky Mountains from North Carolina through the Pigeon Forge valley. It eventually connecting with the Great Indian Warpath near Sevierville, Tennessee.  The Warpath, also known as the Great Indian War and Trading Path, was that part of a network of trails in eastern North America. These trails were developed and used by Native Americans.  Much of modern Sevier County was ceded to the United States by the Cherokee in 1785 with the signing the Treaty of Dumplin Creek.

Early Euro-American settlers followed the Indian Gap Trail to the Pigeon Forge area in the early 18th century. Among these pioneers was Colonel Samuel Wear, who became the area’s the first permanent settler.  Wear built a small fort to provide a safe stopover for the early pioneers where the Pigeon Forge Community center now sits. Unfortunately for Wear, his fort straddled the Indian Gap Trail. This ultimately served as a catalyst for tensions and battles between the frontiersmen and the Cherokees.  Wear’s grave is located on the site of his fort behind the Pigeon Forge Community Center.

A “state” of mind

In the late 1700’s the Pigeon Forge area was part of what is known as the “lost” State of Franklin. This autonomous United States territory only existed four years, and later became part of Tennessee.  Created near the end of the American Revolution, Franklin never officially could join the Union.   The Governor of the State of Franklin was John Sevier – Sevier County’s namesake.

In the days of the early settlers, flocks of now-extinct passenger pigeons would gather on the banks of the area’s river. The river therefore received the name The Little Pigeon River.  In the early 1800s, Issac Love built an iron forge along that same river and a small community soon grew nearby.  By 1830 the town was ready to have a post office, and therefore needed a name.  The name Pigeon Forge serves tribute to Love’s ironworks complex and the rich diversity of frontier wildlife once found along the river.

The birth of tourism 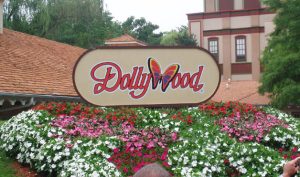 Tourists began visiting Pigeon Forge in the 1870s when a health resort opened at Henderson Springs. It was common at that time for urban dwellers to seek out mountain springs thought to have health-restoring qualities. The opening of the Great Smoky Mountains National Park in 1934 heralded a new era of tourism for the region. However, tourism-oriented businesses were not established in the Pigeon Forge area until the latter half of the 20th Century.  Rebel Railroad, which offered Civil War reenactments and train rides, opened in 1961 shortly after the town officially incorporated.  The attraction was later renamed Goldrush Junction and a log flume amusement ride was added. In 1976, the it was again rebranded as Silver Dollar City and continued to grow in popularity. This park eventually become Dollywood in the mid-1980s, when entertainer Dolly Parton became a partner in the venture.

In the early 1980s, the town launched an aggressive economic development plan.  Theme parks, music venues, and outlet malls were all created in order to increase tourism.  By 1987, four outlet malls had launched in Pigeon Forge.  By the early 1990s, such malls accounted for 44% of the town’s gross revenue.  Nearly forty years later, shoppers from across the nation visit the town’s hundreds of factory outlets and specialty stores. 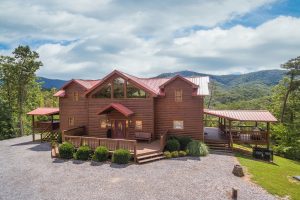 Be sure to check out all of our vacation guides for planning your Smoky Mountain getaway.  You can also follow us on Facebook and Instagram for the latest area information!