The road was shut down in January after a massive landslide washed away the land supporting the road.

Crews have been working since then to re-stabilize the land and repair the roadway.  Park officials expected the road to reopen by May 15, 2013.  It was open by 10 am on April 15.  Crews from contractor Phillips-Jordan worked 24 hours a day in the last few weeks and finished the paving and striping of the road over the weekend. 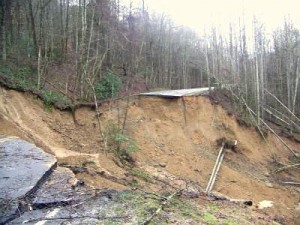 Workers moved 50,000 cubic yards of crushed rocks to better support the road surface and added drainage  Hopefully the work will prevent a landslide from happening in the future.

The Park Service and the Eastern Band of the Cherokee offered the contractor $18,000 per day for each day of completion prior to May 15, with a maximum of $500,000.