Among the fabulous fun in the Great Smoky Mountains towns of Pigeon Forge and Gatlinburg: dinner theaters. Singing, dancing, pirates, fights, comedy, and live animals of all sorts including buffalo, long-horn cows, piglets and horses. All while you and your family enjoy marvelous, tasty southern, home-cookin’-style meals.

Dinner theaters are some of the most family fun you can have during your mountain cabin vacation, and among the favorites are those operated by the Dolly Parton family of businesses. American Patriot Getaways has discount tickets and amazing cabins nearby for your trip. 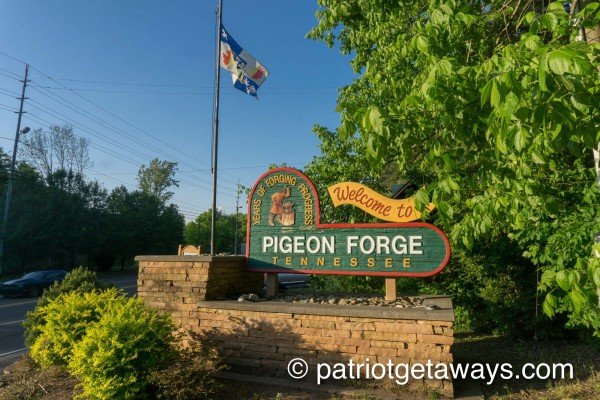 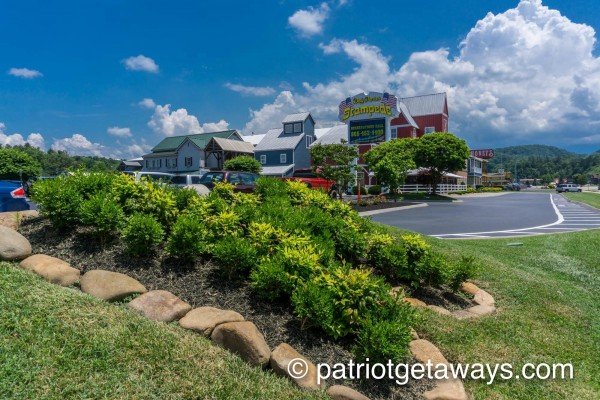 At Dolly Parton’s Stampede in Pigeon Forge, Master of Ceremony’s Jay Teeter (a local minister by the way), sits tall upon his horse and introduces all the acts, sings, leads his horse in dance and argues with Skeeter – the goofy absent-minded back-stage guy who really wants to be in the show. He is definitely one of the stars.

The Stampede, in its 32nd season, is geared around family, audience participation, good-natured competition, a tasty country meal and a professional and entertaining show. Horses are the main focus – with teams of professional trick riders.

Competition in the 35,000 square-foot main arena is between the North and the South with the audience divided among the two, cheering and stomping and clamping.

After introducing the horses and riders, the show officially opens with some history about the old west – with real life buffalo in the coral and a beautiful Native American dance with an actor dressed as a beautiful bird. Drummers drop sit hanging from the ceiling as Dolly Parton’s voice rings out with her song “Sha Kon o Hey”.  The traditional spelling of the word, Shaconage, means “The Land of the Blue Smoke” and is the original Cherokee name for what is now known The Smoky Mountains.  The instrumental portion is as beautiful as Dolly Parton’s singing.

Long horn cows and cowboys on horses roam the coral before a covered wagon caravan comes in with lots of lively singing and dancing.

The Roman Ring of Fire

A female rider named Gator comes out standing up on two horses. She rides around the coral as fire shoots up on one end. Then a large ring catches fire in the middle of the coral and Gator takes guides the horse through and then over hurdles that are on fire.

Riders come through hanging upside down off the horses, side saddle and sometimes dancing. Even the wait staff gets into the act, participating in the opening, closing and at least one other scene during the evening.

Along with the North and South games on horseback are the audience participation portions, which include the youngest children chasing either their North or South chicken across the finish line. Adults trying to get giant horseshoes onto a central post and a group representing each side filling buckets with water and passing them forward to tip another bucket at the end to win the round.

Piglets or tiny pigs! Just pigs! The cutest little oinkers you’ve even seen compete for an Oreo cookie in their own race around a mini track that will have you squealing for more. As will Skeeter’s pint-sized ponies and all his antics.

Country Dinner
The meal itself is a hoot too. Until recently, visitors didn’t even get forks – everything was to be eaten with your hands – slurping thick creamy vegetable soup from a bowl (you still don’t get a spoon), eating roasted chicken, corn on the cob, potatoes, a homemade biscuit and country ham – all brought in family style and placed on your plate from large buckets or trays by the wait staff. Soft drinks, tea and water are served with your meal, however beer and specialty cocktails are available for purchase before going into the stadium.

You get dessert too! Ours was a flaky pastry filled with mouth-watering and warm apples. Vegetarian and gluten-free meals also are available. It’s best to give advance notice but my waiter handled a last-minute vegan request like a champ and didn’t miss a beat. 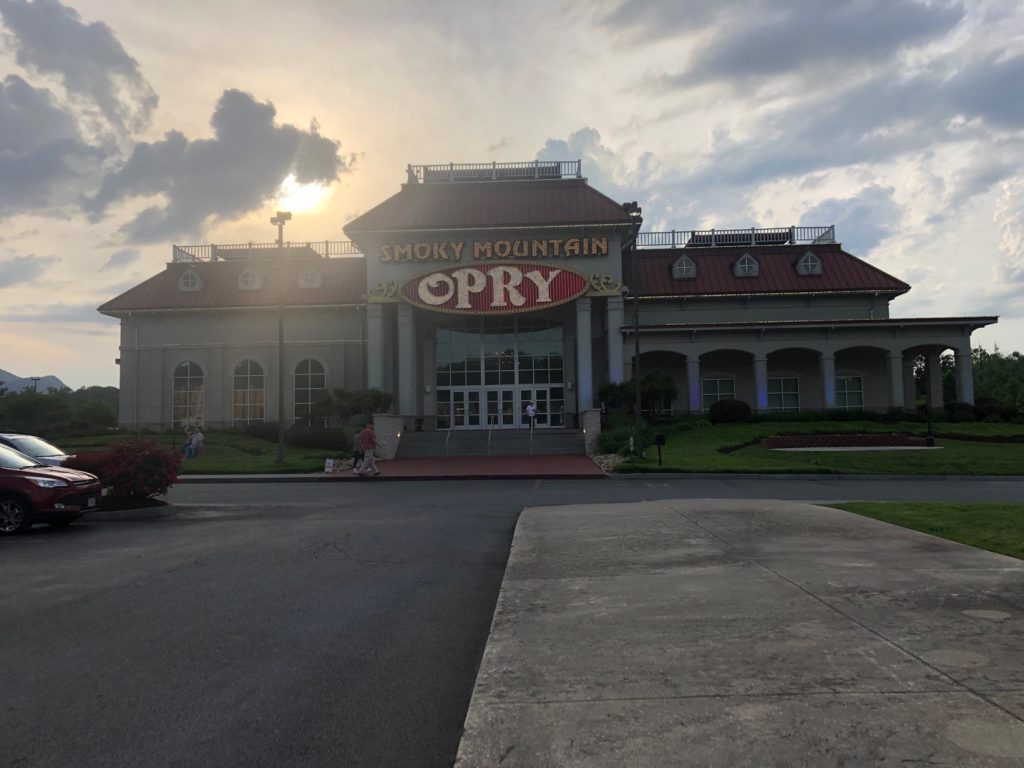 Located at 2046 Parkway in Pigeon Forge, The Smoky Mountain Opry is a musical variety show that takes visitors on a journey through musical history with fabulous showmanship, including high-flying musicians, and dazzling costumes. From country to rock ‘n roll, big band, swing, gospel and movie themes, The Smoky Mountain Opry theme is “Come feel the music.” And you do feel the music.

Magic is another part of The Smoky Mountain Opry.

“Magic, mystery and music together.”

Magic Beyond Belief stars Darren Romeo, the only protégé of Master Illusionists Siegfried and Roy. Romeo creates a multi-million dollar “Magic Beyond Belief” production that features a a cast, along with Darren’s magical illusions, musical tributes and levitations. Unicorns, Mermaids and floating tables all are part of the show.

Romeo has garnered an extensive list of accolades including: “Magician of the Year” from the Magic Castle, The Academy of Magical Arts, Inc.; “Show of the Year” (2 years in a row) from the Branson Critic Association and the “Milbourne Christopher Award for Notable Contributions to the Art of Magic” from The Society of American Magicians (SAM).

Romeo honors Harry Blackstone Jr.’s legacy by performing his famous “Floating Light Bulb” Illusion – the only magician in the world granted permission from the Blackstone family to perform this full tribute.

An all you can eat family dinner adventure, Hatfield & McCoy Dinner Feud puts visitors in the middle of the longest running feud in history. Visitors are asked to help the Hatfields and McCoys try to settle their differences mountain-style.

Singing and dancing, “mighty feats of strength, jaw dropping stunts and side-splitting comedy” are all part of the fun. How about a good ol’ fashioned hoedown!

Special meals are available including Gluten Free, Vegetarian or Vegan – call the box office for details and to make a request.

Later this month, Dolly Parton’s Pirates Voyage Dinner & Show will open. A soft opening is scheduled for May 24 with the grand opening on June 7, according to Visit my Smokies, owned by Sevier County, Tennessee.

The pirate arena features a 300,000-gallon indoor water stage with a 15-foot lagoon and two 25-foot pirate ships. The cast includes aerialists, platform and springboard divers, performers who work with fire and tumblers, according to Visit My Smokies. The show, modeled after successful programs in Myrtle Beach, South Carolina, plays host to the Crimson and Sapphire pirates to battle on deck, in the water and in the sky above their full-sized pirate ships in the spectacular lagoon, according to Dollywood’s Website.

Sea lions and sea birds are a part of the educational enclosure at the front of the dinner show attraction.

Check out this video from the show in Myrtle Beach.

How to make it

Simmer until desired consistency (it should turn out nice and thick).

Stir constantly, careful not to let it come to a boil.

Garnish the soup with chopped parsley and serve.

Notes from the author: Now the recipe doesn’t call for any flour or a roux of any kind but when I made it I wished I had made one, it took a looooonnnnnggggg time to thicken up, maybe I’m just impatient! It was soooooooo very good though, hope you all enjoy!!!

Ready to plan your Great Smoky Mountains vacation, stay near all the action, and get discount tickets to these amazing shows?

Find cabins for large groups and families near Pigeon Forge and all the dinner theater action. Give us a call at 888-876-6509.

Maybe you want a secluded cabin to return to after a day of fun in the Smokies.

Check out our useful vacation guides that include insider tips to help you plan the perfect Smoky Mountain vacation.