Great Smoky Mountains National Park celebrated the completion of Bridge 2 on the Foothills Parkway near Wears Valley, TN with a ribbon cutting event on Monday, June 24. The completion of Bridge 2 marks a significant milestone bringing the park one step closer towards finishing the “missing link,” a 1.65-mile section of the Parkway between Walland and Wears Valley which has been under construction since 1966.

Congressman John Duncan, representatives from Congressman Phil Roe and Senator Lamar Alexander, members of the Federal Highways Administration, local government and tourism officials, and government contractors joined National Park Service officials at the head of the 800-foot bridge. After the short celebration ceremony, guests were able to walk the length of the bridge to take in the panoramic views of Great Smoky Mountains National Park. 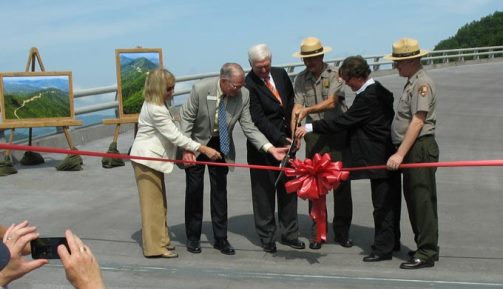 “The Foothills Parkway provides a significant connection between a number of east Tennessee communities, two Congressional Districts, and three counties,” said Superintendent, Dale Ditmanson. “We are thankful to all of the government and tourism leaders who were able to join us for our celebration today and who have supported this important project for our park.”

The Foothills Parkway was authorized by Congress in 1944. The scenic parkway intended to provide picturesque viewing of the Great Smoky Mountains, as well as disperse traffic from the heavily used transportation corridors in East Tennessee.  For more than 50 years, two sections of the Parkway were open. They extended from Chilhowee, TN to Walland, TN and from Cosby, TN to I-40.  They have been open to the public since 1968.

The completion of the “missing link” is currently underway as a “multiple bridges project” funded through Title 23, the American Recovery and Reinvestment Act, the Federal Lands Transportation Program, and multiple Federal Highways Appropriations awarded at $48,438,000. The final stage of the project will complete the paving and other miscellaneous work needed to open the entire 16 miles of Parkway between Walland and Wears Valley.

The Parkway was completed in 2018 and is now driveable, weather permitting, 365 days a year.  With completion of the segment, 16 miles have been added to the roadway.