“It’s called Tomb, an interactive attraction that resembles a pyramid. And it’s coming to Pigeon Forge, home of some of the most interesting and creative attractions this side of Orlando.

A pyramid constructed of plastic foam and stucco is being built in Waldens Landing on the Parkway, yet another reason for visitors to choose Sevier County for their vacations and getaways. Developer Ned Vickers says the $900,000 project will include tearing out the wall separating a pair of vacant stores, remaking their facades with the pyramid and introducing something Vickers believes will be unlike anything ever done in the area. Tomb is expected to open in late May. Vickers saw one in the Northeast. 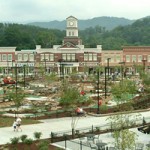 “It had a really successful six-year run in Boston,” Vickers says. “We heard about it and decided we had to go up and see it for ourselves. This is such a unique concept. I was sold on it the first time I went through it.”

Vickers and his partners are to be commended for what they have done to Waldens Landing. Anchored by a modern movie theater — the first for our county — the shopping center has attracted great stores as it has evolved to handle the theater and some new tenants.

Now Vickers is rounding it out with Tomb. Guests will be transported into what Vickers calls a “very immersive, highly themed, Indiana Jones-type adventure.” Inside, they’ll find themselves in the middle of a mock-up of an Egyptian pharaoh’s tomb.

From there, it will be up to them and their guide to find a way out for their group.

When you think about all of the attractions opened or under construction in Pigeon Forge, it’s remarkable. Soon to open is Lumberjack Feud, featuring an arena where lumberjacks will compete and where visitors can try their hand at some competitions. The Fee Hedrick Entertainment Group is about to open Hatfield vs. McCoy in what used to be Black Bear Jamboree. Dollywood continues to expand with new rides and fun added each year. And don’t forget Titanic Museum Attraction, all of the entertainment theaters and more.

Vickers believes Tomb will mesh perfectly with the feel of Pigeon Forge as a whole. It will be brightly lit (a Plexiglass topper on the pyramid will be filled with color-changing lights), a bit ostentatious and fully geared toward catching the attention of passersby on the Parkway, who Vickers hopes will be drawn into the shopping center.

And that would mean good news to the city as a whole.”

Learn More About This Attraction  – The Tomb Escape Game