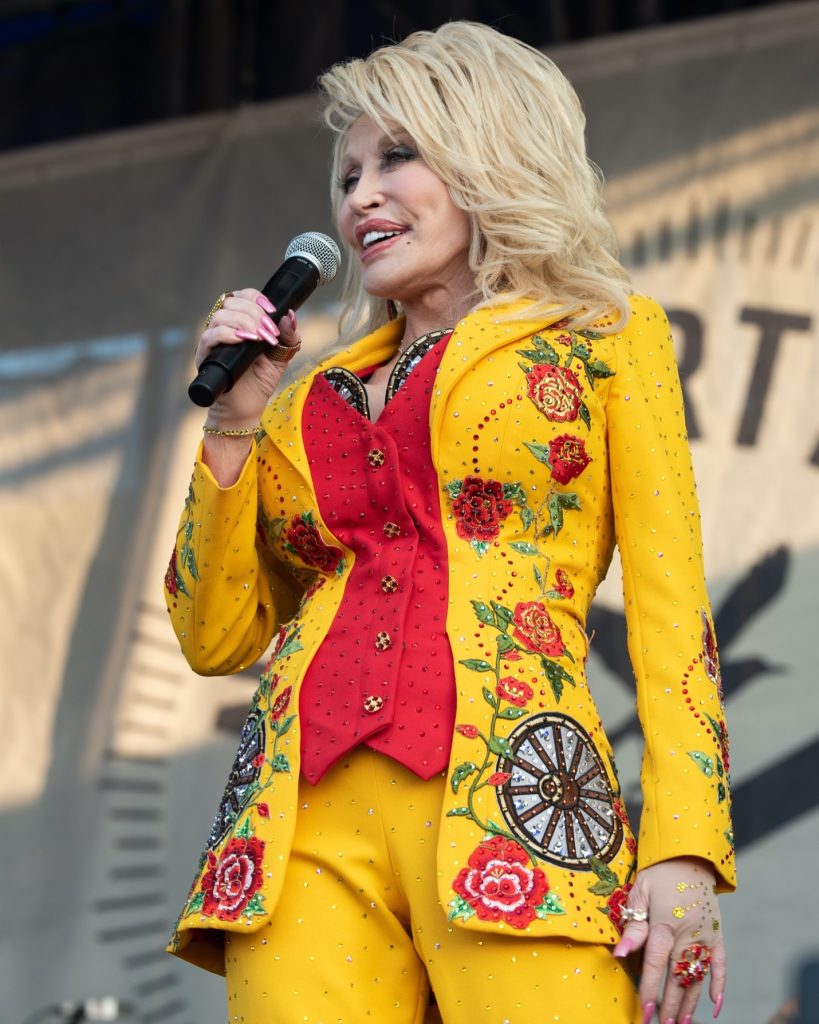 In our book, the day we say, “Happy Birthday, Dolly Parton”, should be a holiday! The pride of Tennessee, Dolly Rebecca Parton, was born on January 19, 1946, in Sevier County, Tennessee, also home to The Great Smoky Mountains National Park. Undoubtedly, you’ll find that it’s the most visited national park in the United States, Dollywood and American Patriot Getaways.

At 77, Dolly Parton isn’t slowing down. She was inducted into the Rock and Roll Hall of Fame wearing a black leather jump suit, singing a new song “Rock” with an electric guitar and promising a rock album soon. She rang in the New Year co-hosted “Miley’s New Year’s Eve Party” with Miley Cyrus. Plus, Dolly released the album “Diamonds & Rhinestones: The Greatest Hits Collection” in November; has a children’s book coming out in April; and joined the TikTok community, where she shares her love of cooking and baking.

Additionally, Dolly was one of 12 children born to Avie Lee Caroline and Robert Lee Parton Sr. The family lived in rural Appalachia. Many of her songs have been about her childhood including Coat of Many Colors (movie also).

A statue of Dolly stands in Sevierville, Tennessee. The statue debuted in 1987, shortly after Dollywood opened in Pigeon Forge. 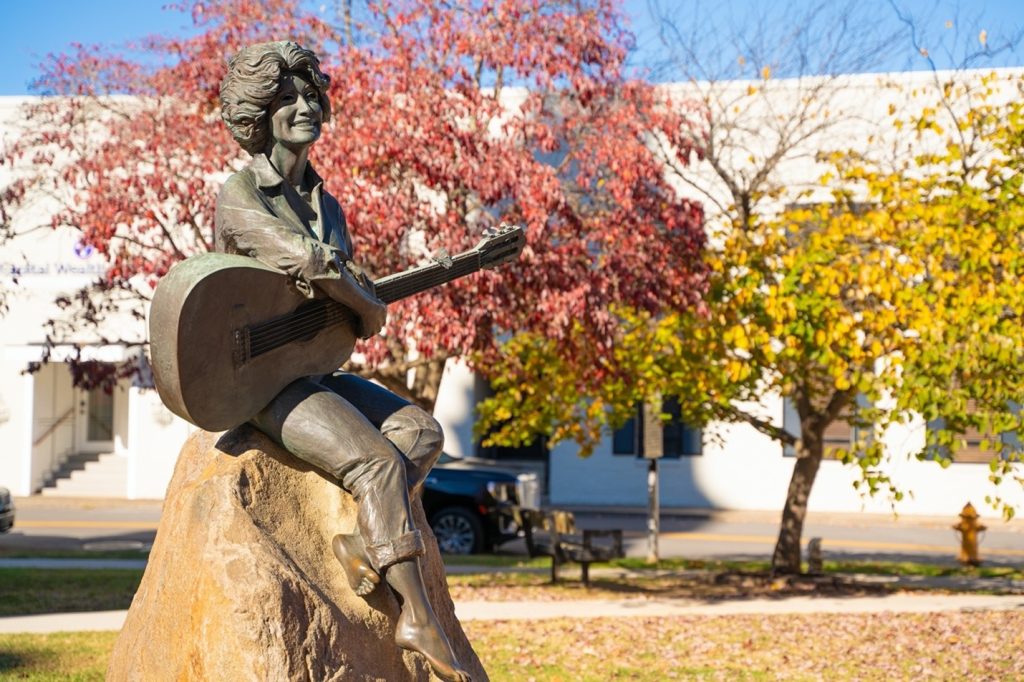 Finally, Dolly was inducted into the Rock and Roll Hall of Fame in November. Watch the induction by Pink, Dolly’s acceptance speech and her performance here

Additionally, the eight-time Grammy winner, has achieved immense global success as a musician and blazed a trail for generations of artists to come. “In a career spanning six decades, she has recorded more than 50 studio albums and, by her own estimation, written nearly 3,000 songs,” according to her website. 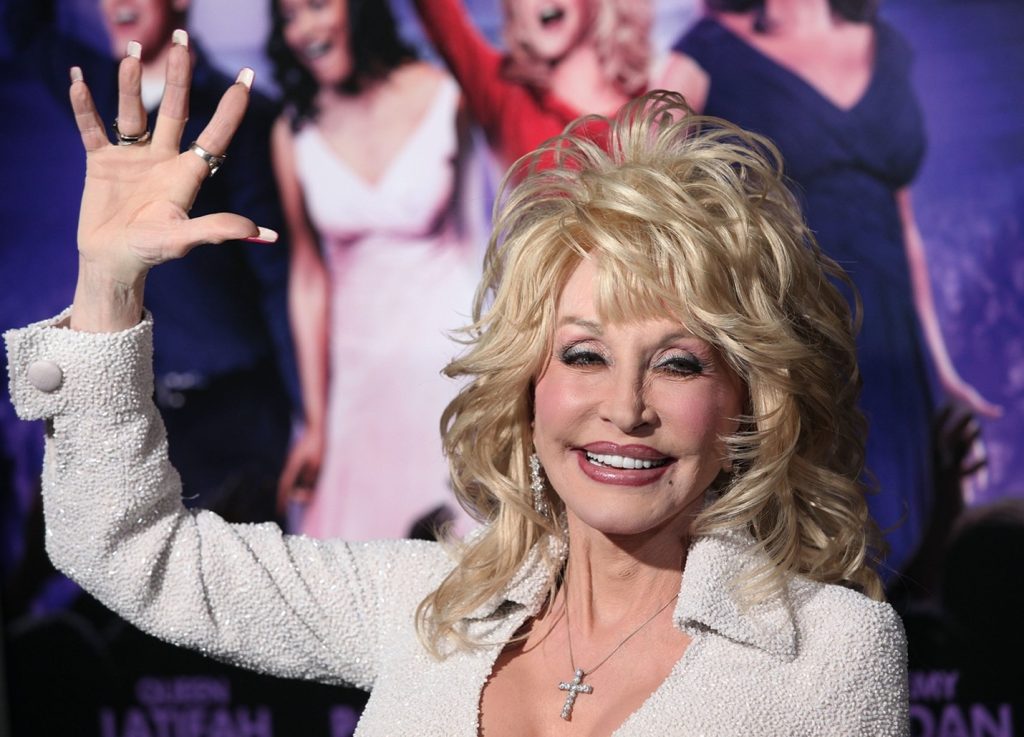 Furthermore, Diamonds & Rhinestones: “The Greatest Hits Collection” is Dolly’s latest album. Also, it’s highlighting a career-spanning retrospective showcasing 23 essential recordings from 1971-2020. A cross-label anthology, “Diamonds & Rhinestones: The Greatest Hits Collection” brings together recordings originally released on Dolly Records, RCA Victor and Columbia Records, as well as the Butterfly Records digital single, “When Life Is Good Again,” written and recorded in 2020 as Dolly’s musical message of hope to fans as the pandemic rolled in.

Parton’s Imagination Library, inspired by her father’s inability to read, has provided free books for children through age 5 in the United States, Canada, United Kingdom, Australia and Republic of Ireland. To date, Dolly’s library has provided 172,752,307 books to children.

Soon, Dolly Parton will publish a new picture book about her god-dog, Billy the Kid, releasing on April 25, 2023 with Penguin Workshop, an imprint of Penguin Young Readers. Aimed at readers ages 4-7, Dolly Parton’s Billy the Kid Makes it Big features illustrations by MacKenzie Haley and tells the story of Billy the Kid, a dog who loves barking to the beat of country music and sets out to make it big as a country music star in Nashville. But when he encounters some bullies at the Battle of the Bow-wows, he must call on his favorite songs, and the help of some new friends, to regain his self-confidence and be the star he always knew he could be.

Evidently, to bring Billy’s story to life, Dolly teamed up with Mackenzie Haley, an illustrator from Louisville, Kentucky, whose books include The Ninja Club Sleepover, Pegasisters Go to Camp, and Snitchy Witch, among others. Dolly’s previous children’s books include Coat Of Many Colors and I Am A Rainbow.

Dolly Parton’s Billy the Kid Makes it Big, illustrated by MacKenzie Haley, is set for release on April 25, 2023 and is now available for preorder.

Moreover, in November, Dolly was awarded billionaire Jeff Bezos’ Courage and Civility Award, which carries a $100 million donation for the singer to bestow upon the charities of her choice.

To illustrate, during the early days of the Covid-19 pandemic, Parton made headlines for donating $1 million toward the development of Moderna’s COVID-19 vaccine. In 1995, she launched the Imagination Library to boost literacy among children. The initiative has gifted more than 193 million free books to children.  In 2016, her My People Fund gave $9 million to people who lost their homes to fire in Pigeon Forge and Gatlinburg, Tennessee. 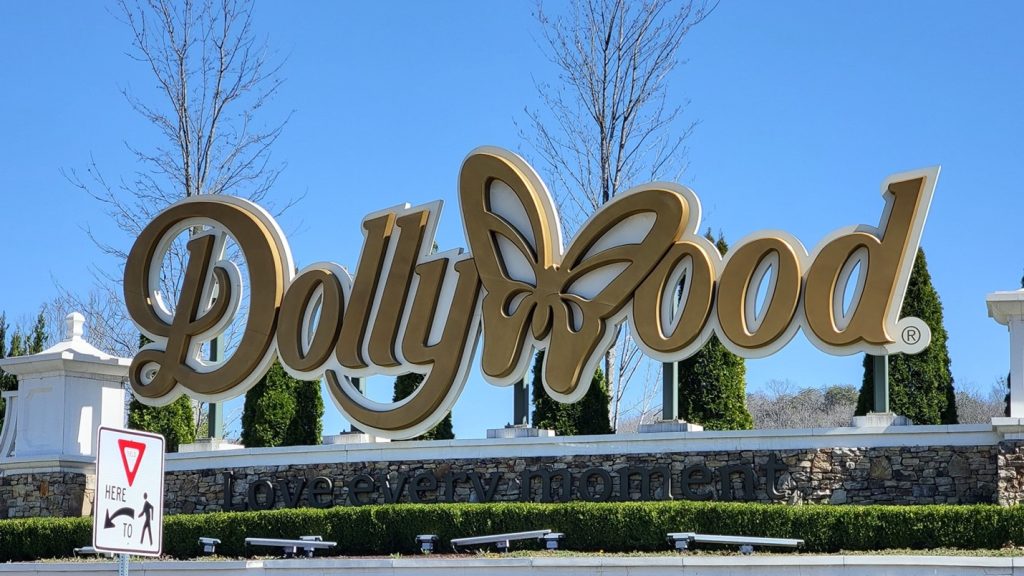 Dollywood opens for its season on March 10. Dollywood Splash Country opens May 13.

In fact, Dolly Parton’s Stampede in Pigeon Forge is where Master of Ceremony’s Jay Teeter (a local minister by the way), sits tall upon his horse and introduces all the acts, sings, leads his horse in dance and argues with Skeeter – the goofy absent-minded back-stage guy who really wants to be in the show. Indeed, he one of the stars. 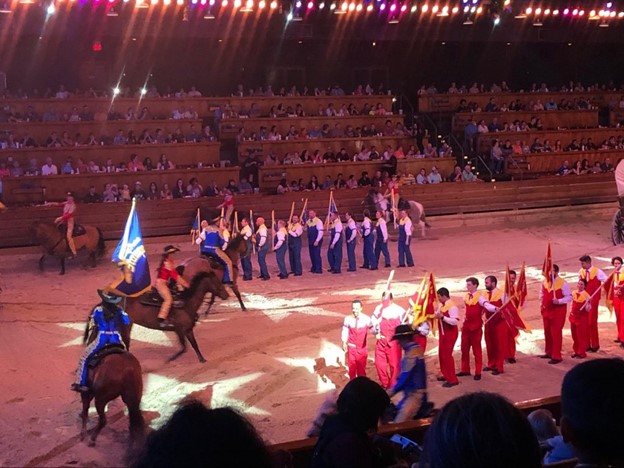 Also, The Stampede, in its 35th season, is geared around family, audience participation, good-natured competition, a tasty country meal and a professional and entertaining show. Horses are the focus – with teams of professional trick riders.

Additionally, there’s competition in the 35,000 square-foot main arena is between the North and the South with the audience divided among the two, cheering and stomping and clamping

Since Pirate’s Voyage was Dolly’s next challenge after 2 decades of successful seasons with the Stampede, Dolly collaborated with Mark Bryner to write the musical score. 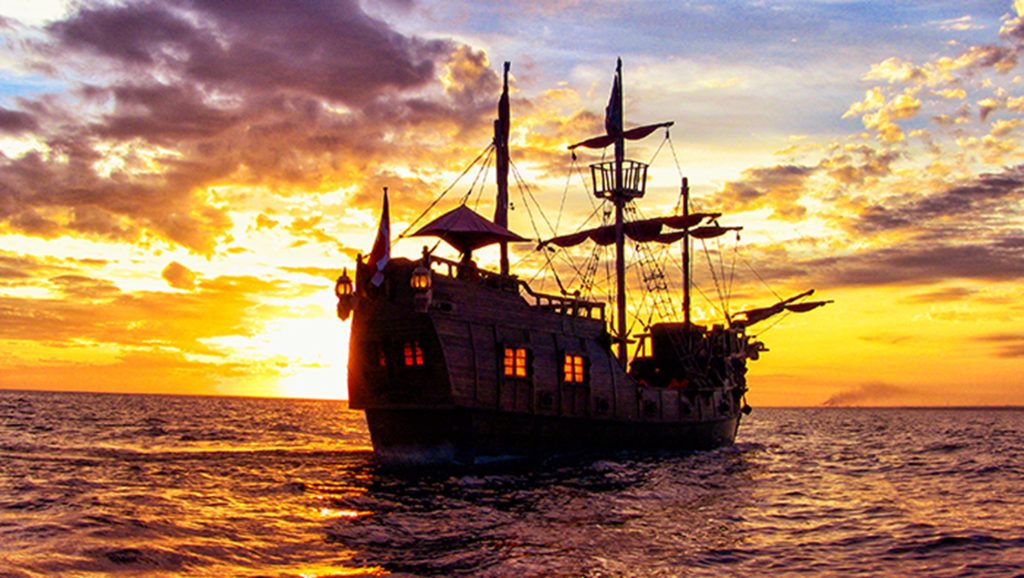 Indeed, you’ll want to join “the most famous pirate, Blackbeard, and his quarter master, Calico Jack, as they lead the Crimson and Sapphire crews in a battle on land, on deck, in water and high above full-sized pirate ships in an indoor hideaway lagoon.” 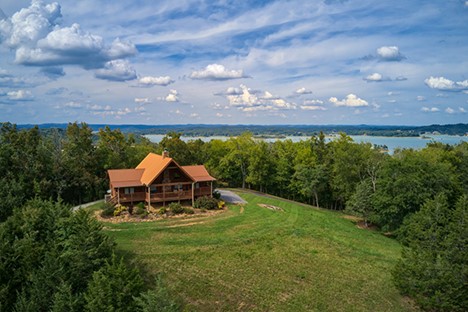 Finally, book your vacation today and enjoy all that Dolly Parton loves about Sevier County and The Great Smoky Mountains! Let American Patriot Getaways help you plan your stay in a mountain cabin and all your adventures!

Give American Patriot Getaways a call at 800-204-5169, then let our experts help you find the right cabin in the right resort for you.  Along with all the right fun, food and entertainment for your perfect Smoky Mountains vacation, they’ll help you find what you’re looking for!

Lastly, if you need more help planning your vacation to Gatlinburg or Pigeon Forge, be sure to follow us on Facebook and Instagram for all the latest area news and happenings.